The Greenfield Mural was a labor of love -- twice -- uniting a small group of talented people, and supported by several local businesses and non-profit organizations. Please thank them if you see them.

History of the Mural

The Greenfield Mural was originally the brain child of Rebecca Tippens, Greenfield resident at the time, and her friend and community muralist from the NYC area, Janet Braun Reinitz, who has collaborated in over 60 community murals across the globe. Together saw the big wall adjacent to the Veterans Mall park beckoning for vibrancy. The Veterans Mall committee agreed, and we came up with the theme for the mural to complement the Veterans Park memorial: to honor those things of the county that we have loved whether in memory or presence. The greys of the postcard-like images of the buildings, bridges and monuments, reflect their long histories and for some our grief at their absense. The mural is styled as a cross stitch design, reflecting, too, the fabric arts that so many throughout the county are skilled in. Janet shares: “Implicit in my work are stories waiting to be re-told – remembrances of recent events and those fading from memory that resonate in many registers, formal, narrative and personal.”

We put a draft design of the mural in the library asking for input and suggestions; we collected those suggestions daily and nearly 100% were included! For a couple of weeks, the mural was front page news as people debated even having what would be the first mural and large piece of public art in the city; those concerns culminated in a public hearing at the High School that drew more people than any other hearing had up to that time and a vote for acceptance! Talk about publicly involved art from its very inception!

Painting began for the Greenfield Mural by volunteers in the community as summer drew to a close in 1990 -- coordinated and designed by Janet Braun Reinitz and then by Greenfield artist Nancy Baker who took over that coordination when Janet had to return to NYC to teach. Nancy says, "I was in between jobs at the time and saw this as a great chance to do something for and with the community."

A small group of thoughtful futurists and artists had coalesced around Janet to learn about mural painting. Rebecca coordinated community volunteers who not only painted but helped in physical ways, like donating paints, brushes, scaffolding and more. On the bottom left side of the mural is a list of those volunteers and financial supporters (see, below).

Cleanup and Additions in 2017 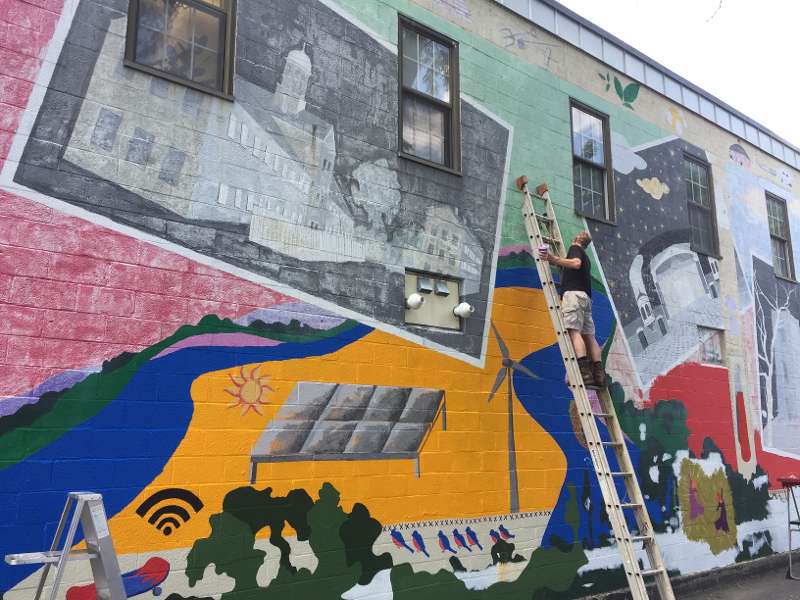 Nearly twenty years on, in 2017, the colors on the mural were fading and Rebecca asked the community if they would want to entertain a new mural design or just refresh its paints. Loudly and clearly, people supported the design that had webbed into the town's consciousness. Again, Nancy Baker spearheaded the painting, and images were added that reflected the area's growth over time; the community placed suggestions into a box displayed at the library's entrance which were incorporated into the repainting. "We worked very hard to find appropriate placement for nearly 30 new images that the community suggested", says Nancy. "It was fun to add all these ideas and really perk up the wall." 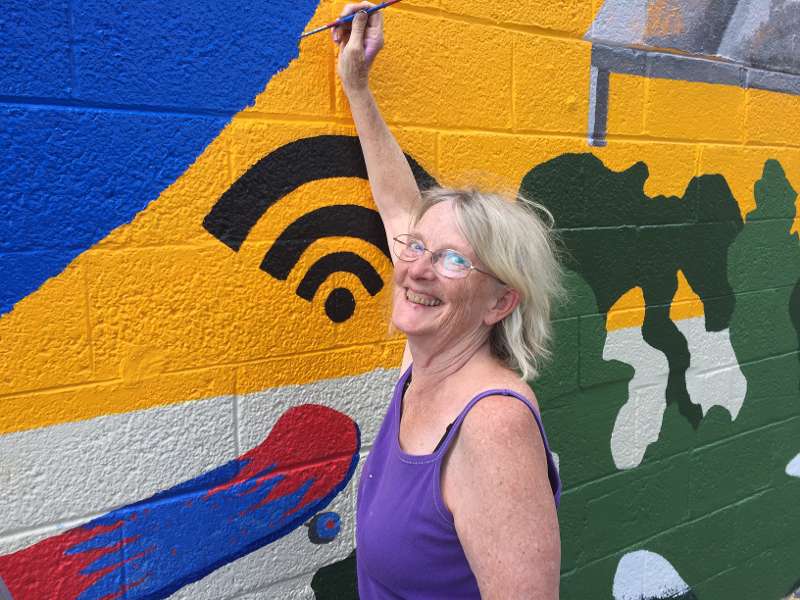 Rebecca then coordinated the gathering of materials and volunteers, Nancy the design and painting and another group of mural enthusiasts went to work over the month of September in 2017. On the bottom right side of the mural is a list of those individuals and businesses who gave more than 6 hours of help to refresh & update the images and/ those who donated at least $100 and/or contributions of goods and services to cover material costs. This mural is a reflection of our county coming together to create a paean to our place and the things we love, do and cherish. Its completion was celebrated with a grand evening of stories and songs at Hawks and Reed just as the fall winds began to blow in. 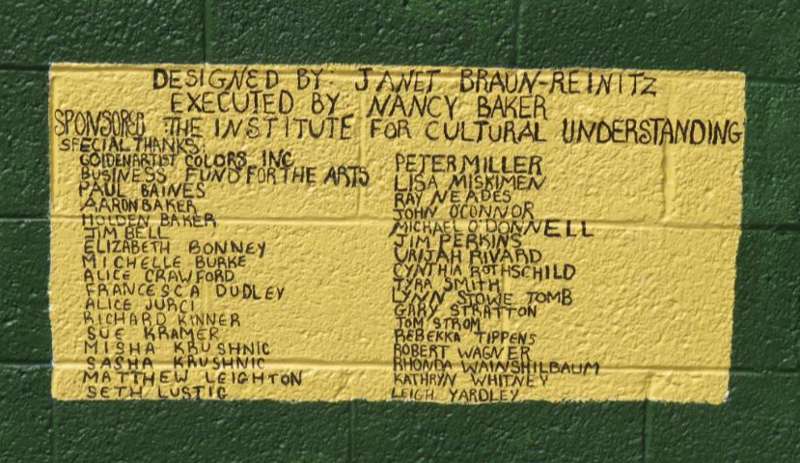